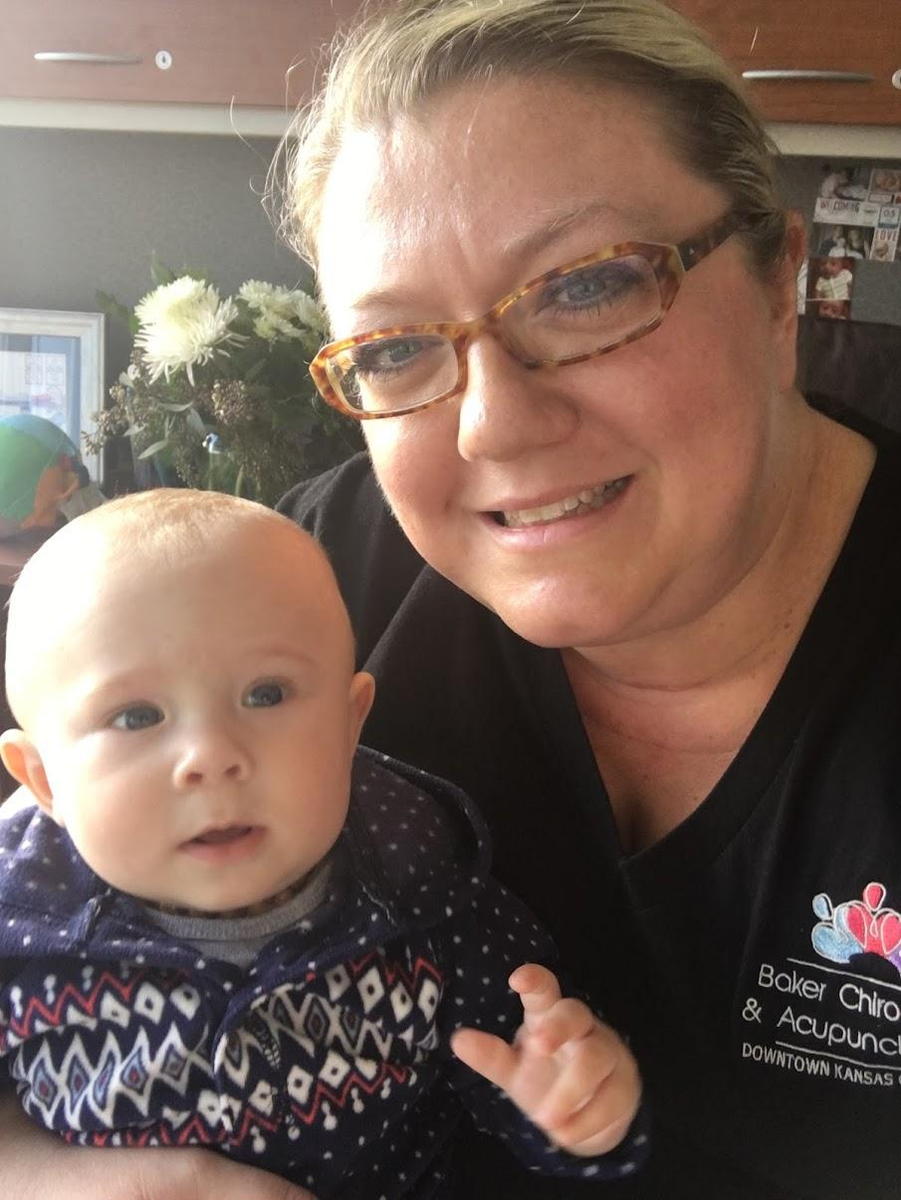 It was the last day that our office was seeing patients before the Christmas Holiday last year (2016), and the phone rings.  It's a mom, and you can hear the frustration in her voice.

She was calling to see if we can help her son.  He has been crying for 7 hours every evening for the last five MONTHS. This baby is only 5 1/2 months old.

Let that sink in.

This baby has been in distress for 7 hours a day for the last five moths of his five and a half month life.

Sometimes you get the call, that you know you need to do whatever it takes to get that child seen, immediately.

This family was in from out of state and lived far away from a big city and therefore far away from a lot of resources. When they arrived in Kansas City they started looking for options, and found our office.

We had an one appointment left for that same day, and mom needed to check with her family to see if they could get to the office at that time. She had to call me back to confirm.  By the time she called me back the appointment filled in because it was the last day we were in the office for 5 days.  I decided to stay late to take care of this baby.  It was no accident that our staff person was out of the office when the call came in that mom still wanted to bring her baby in, because I answered the phone the second time she called, and just knew it was one of those times that you have to stay.

Little did I know how emotionally and physically stressful this baby's distress had been on both the parents and the child.  He cried the nearly the whole time he was in my office.  Everyone could see the stress in the parents as they described his history, how his fussiness had kept getting worse and worse, and even they couldn't calm him down most of the time when he was having these bouts of crying.

When I examined him, lightly touching almost every spot in his back made him cry some more.  He was tender all over his back.  Mom and Dad described a somewhat traumatic birth, where the person delivering him did pull on his neck a lot.  He had been diagnosed with colic at two weeks old.  His mom says he has always seemed uncomfortable, and wasn't okay laying on his back or stomach.

Since he was two weeks old, he had a handful of good days, but most days between 4pm and 11pm he was nearly impossible to soothe.

He was also on Nexium, and had been since he was a month old.  The parents didn't think it was really helping.

Their other Doctors told them it was just normal colic and would eventually get better.

Please parents, if your child is inconsolable for seven hours a night, please get a second opinion, or keep looking for something that is going to help.  Don't stop searching for answers.

I started to adjust him.  He cried during 90% of his adjustment.  We took four different breaks to have the parents soothe him, and during the first two breaks even they couldn't calm him down.  I was using the amount of pressure for his adjustment that you could comfortably press on your eyeball without discomfort, or press on the skin of a ripe tomato without piercing it.  He had misalignments throughout his spine, rib cage, and cranial bones.  This baby was hurting, and hurting a lot.  He was stiff and rigid until about three quarters of the way through his adjustment, when just for a few seconds he laid his head on mom's shoulder.

His mom was surprised.

He hadn't rested his head on her shoulder since the first two weeks of his life.  WHAT?!?!

Can you imagine being in so much discomfort that you can't even relax your neck enough to lay on your mom's shoulder?

The parents were relieved to see that by the end of his visit, which consisted of a Chiropractic Adjustment and Craniosacral Therapy session, that he had actually started to calm down.

When they placed him in his car seat, he was calm and relaxed.

Mom and Dad both said he was NEVER relaxed in his car seat, and usually was miserable, crying and angry, the entire time he was in his carseat.  That moment right there told me that he was going to get better.

Our office had just spent the last hour and a half hearing this little baby cry in agony, sounding like someone was hurting him no matter what happened.  It didn't matter if Mom, Dad or I held him, he was crying and screaming in agony.  I kept asking the parents if they were ok while their baby was screaming, and they kept reassuring me that he was always like this every evening, and that it had become the normal experience for them.

I don't know if many parents could handle this level of constant crying, screaming and obvious discomfort.

After they left the office, I went home to start my Christmas holiday.  I cried for most of my drive home...partially because it was very emotionally intense to watch that baby suffer for even 90 minutes, and mostly because I was very clear that that baby's life was changed forever after his Chiropractic Adjustment and CranioSacral Therapy session.  I was so thankful that they called, and that we were there to help.

After his first adjustment, his mom said that his symptoms had improved 50%.  He spent more time playing with his toys in the evening, and now was generally just fussy when he was tired and ready for bed.  He even slept for 12 hours one night (that tells me that his body was feeling a lot better, because he was comfortable laying down for such a long period of time).   He cried a lot less during his second adjustment, and his parents said it was the same type of crying that he did when he was being held by unfamiliar family members during Christmas (meaning that he wasn't crying out of discomfort, it was because he didn't know me well).  This was a huge breakthrough.  By the end of his second adjustment, he was laughing and smiling.

After his second Chiropractic Adjustment and Craniosacral Therapy appointment, he did not have ANY FUSSY MOMENTS THAT EVENING.

Seven hours of fussiness a night (which are often symptoms of spinal and cranial misalignments in the body) were GONE after two visits.  I was so excited, and completely blown away with his rapid improvement.  Sometimes when babies have been suffering for awhile, it takes longer than that to be this much better.  Mom said that his range of motion with his neck and body in general was better and that he seemed like he was sitting up taller.  She also said he was starting to babble and talk a lot more since his last appointment.  Even his extended family had noticed that he was feeling so much better.

Mom and Dad told me they had made the decision that Mom would remain in Kansas City for a few more weeks to make sure he was stabilized before they returned home, and hoped to follow up with a Chiropractor for him even after that.  Mom did stay for several more weeks and this little guy just continued to do well, and blossom from a developmental standpoint as well.

At his last visit, they brought me some beautiful flowers and a sweet thank you note.  The mom told me that just before she brought her son to our office, she went to the Doctor to talk about anti-depressants and starting psychotherapy to help deal with the seven hours of screaming a night.  She told me that I had no idea how much I had helped not only their son, but also her.  As a result of his improvement, she no longer felt like she needed medication and therapy.  Everyone was doing so much better.

It's a moment that I will always treasure, and never forget.

If you or someone you love is experiencing even a minor version of what this family was going through, please call us.  We would be happy to help.  If you live out of town, and our office is too far to travel to, please seek out a local Chiropractor in your area that has a lot of experience treating children.  Part of my purpose in life is to help as many families as I can through Chiropractic and natural health care.  Please share this and help spread the word, so that in the future, no child has to suffer like this again.

Better Health is Just A Phone Call Away!

November Newsletter: It's always a good idea to visit your chiropractor aft...

Feeling sore after a car accident? Give your chiropractor a call.

Staying active during the winter offers important benefits for your health.

January Newsletter: Why You Should Visit Your Chiropractor This Winter

Is a visit with the chiropractor on your winter calendar?

Too Much Tech Could be Causing Your Neck Pain

Wondering why your neck hurts? Your tech habits could be the reason.

Jaw Pain? You May Have TMJ

Could your jaw pain mean that you have TMJ?

Worried about gaining weight during the holidays? The healthy eating tips will help you avoid piling on the pounds.

December Newsletter: Custom Orthotics Could Be What You Need to Fight Foot ...

Are your feet killing you? Orthotics could end your pain.

November Newsletter: Dealing with back pain? A herniated disc could be the ...

Got stubborn back pain? You may have a herniated disc.

January Newsletter: How Chiropractic Will Help You Reach Your Health Goals

Planning to improve your health this year? Chiropractic can help.

Find us on the map